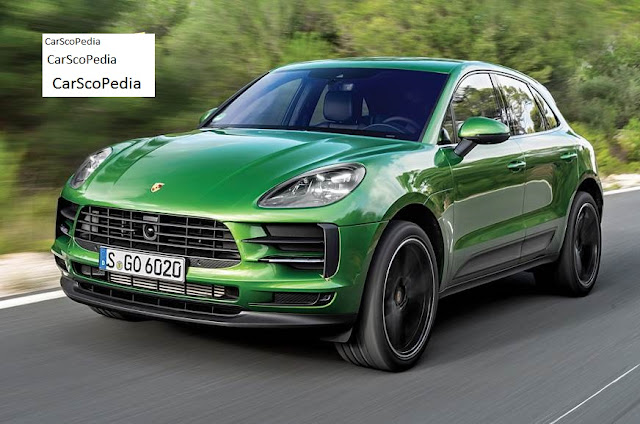 The Porsche Macan has received a mild facelift for the 2019 model year and been revealed globally. The Macan is the smaller of the two SUVs offered by Porsche. Its current generation had debuted in India in 2016. For 2019, the Porsche Macan receives technology updates as well as new taillights. The LED lights at the rear are the biggest change you will notice on the exterior. There is now an LED strip that connects the taillights. In China, the 2019 Macan also receives LED headlights as standard.

This stunning SUV has a mid-facelift segment which comes with new features but the front part of this car coming up with few changes in the front bumper with new headlamps and neither as the bonnet in this mid-facelift model. and wider front grill in the front section of the car. 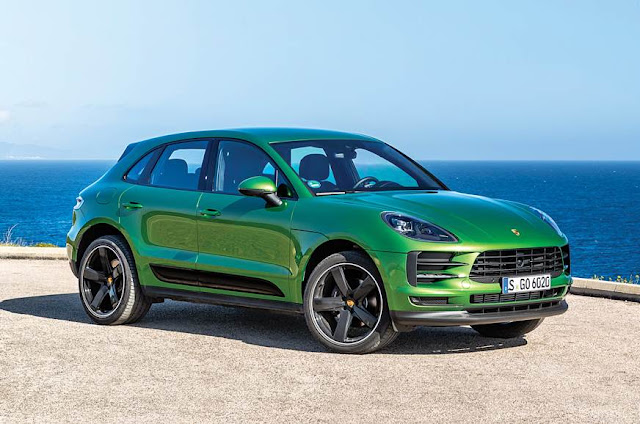 Other changes include new wheel designs (up to 21 inches in size), customisable side-cladding strips and new paint shades – and, of course, I immediately throw my bags into this superb looking Mamba Green car to claim it as my own. It’s when I go around to the back of the car to do that, however, that I see the biggest change. 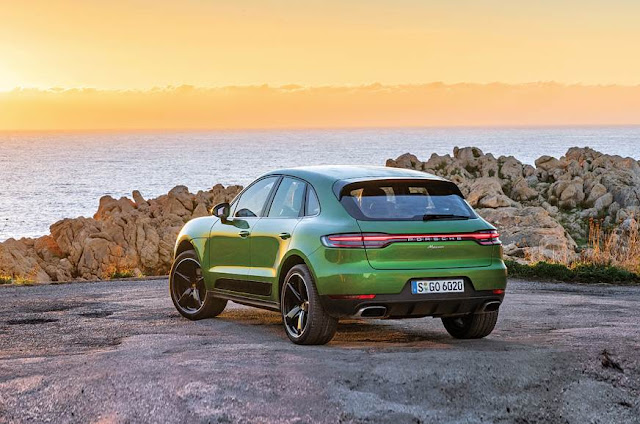 The headlamps have moved from Bi-Xenons to adaptive Matrix full-LED units, which look really aggressive with the new Porsche ‘four dot’ DRL signature. The signature headlamps of the stunning beauty giving the new appearance from the front part of this mid-facelift model. 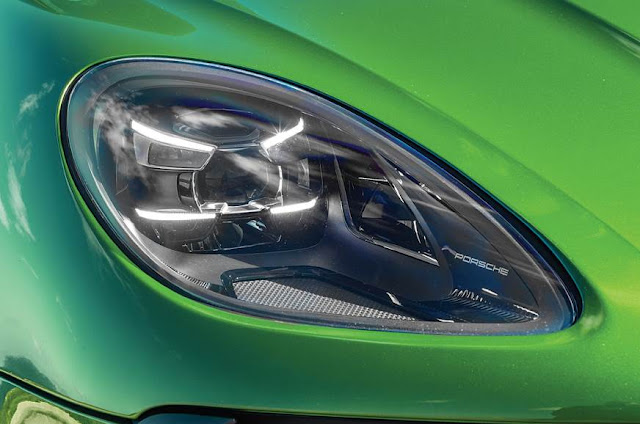 The tailgate has been bifurcated by an LED strip that joins the tail-lamps – much like the Panamera, Cayenne, 718 and even the new 911, but slightly differently executed. I like it. 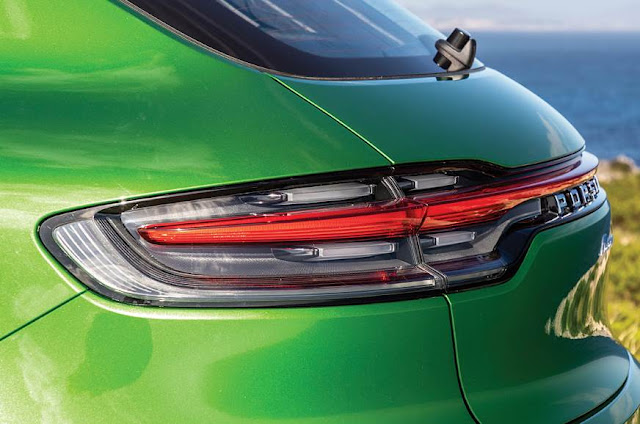 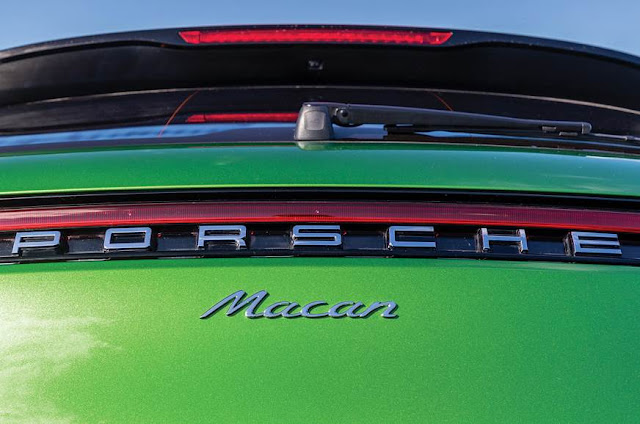 More changes into the cabin features as the new 11 inch touch infotainment system is installed instead of 7 inch unit seen on the outgoing version which comes up with Apple CarPlay and Android Support. Also get the New Porsche Communication Management (PCM) seen on the New Cayenee. This module supports various digital functions and services such as intelligent voice control,  real-time traffic information and “Here Cloud” connection, which offers swarm-based traffic data.  Another addition to the Macan’s cabin is the new optional GT steering wheel which comes with a ‘Sport Response Button’. Like in other Porsche cars, pressing it would give 20 seconds of heightened engine and transmission response mainly for quick overtaking. 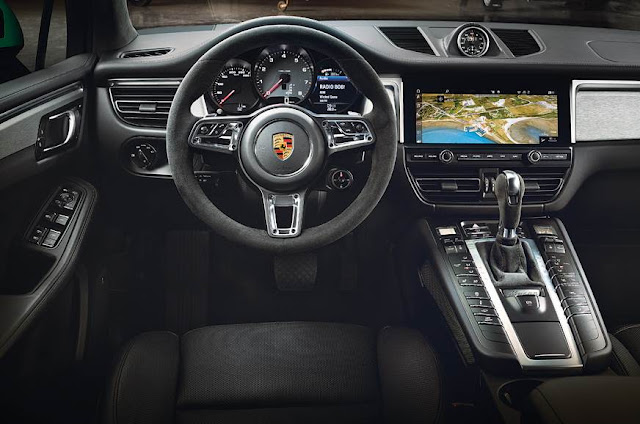 Also not easy is needling my way through downtown Mallorca’s combo of rush-hour traffic andtricky one-ways in this weather. It’s not because of the car, of course, which in Comfort mode is as easy to drive as I remember the old one to be. There is a certain degree of heft to the way everything feels in a Porsche, any Porsche, especially when you compare it to rivals of a similar size and type. Compare the Macan to a Q5 or X3, for instance, and it’s not quite as light to steer, and the ride – though it’s on air suspension – does feel a little firmer.

The updated Macan is equipped with Traffic Jam Assist system. It includes an adaptive cruise control function and lane keep assist to offer semi-automated driving up to 60kmph. It also gets a new Off-Road Precision App that lets you record and analyse your off-road driving experiences. 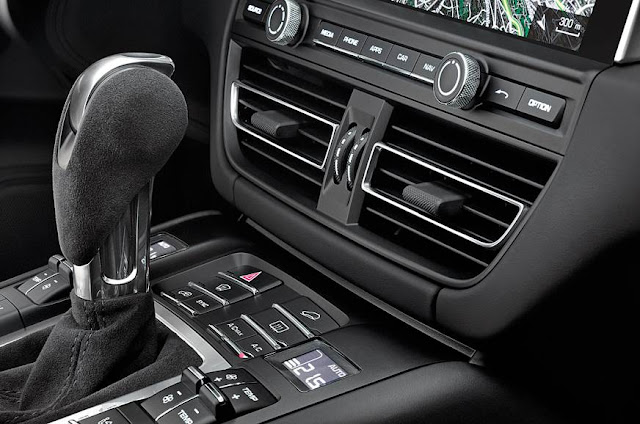 The Macan facelift also features redesigned central AC vents that now sit below the infotainment screen. The new setup gives the Macan's ageing cabin a sense of freshness. The previous model had the central AC vents on either side of the infotainment screen. The new Macan also gets features such as a heated windscreen and air ionizer for better air quality inside the cabin. 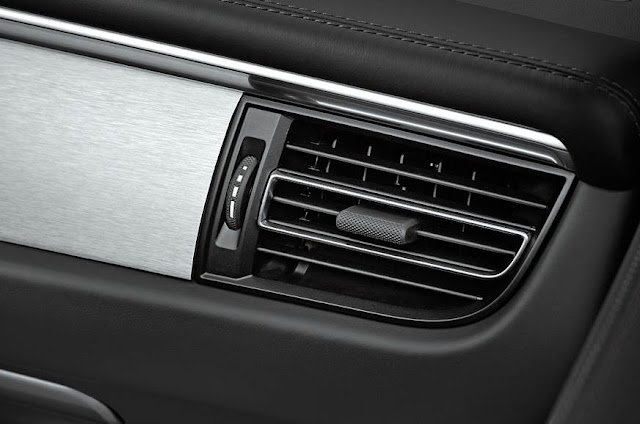 The details is not revealed by the Porsche Motor but expecting is that this car coming up with Electric Engine along with Petrol and Diesel Engines.

However, we expect them to remain similar to the outgoing model, at least in India. Here, the pre-facelift Macan is offered with two engine options. The more affordable option is powered by a 2.0-litre (252PS/370 Nm) petrol engine that sends power to all four wheels via a 7-speed dual-clutch automatic transmission. Porsche claims this variant of the Macan can go from 0-100kmph in 6.7 seconds.

The Macan Turbo is also available with a Performance Package which bumps the engine output to 440PS/600Nm while shaving 0.4s second from the standard Turbo’s 0-100kmph time.

Porsche also offers the Macan Turbo in India. This variant is powered by a 3.6-litre V6 petrol engine, which makes 400PS/550Nm, paired with a 7-speed dual-clutch transmission. It has a 0-100kmph time of 4.8 seconds.