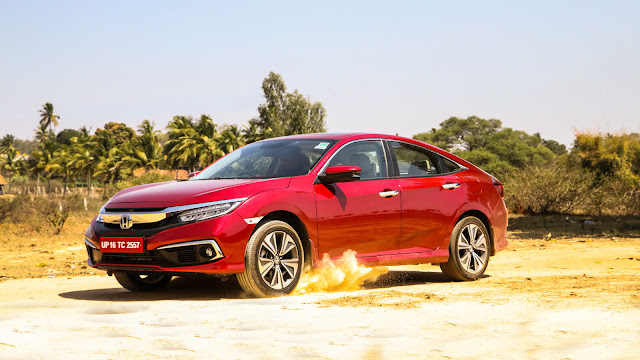 The Civic was the crowning glory in Honda India's line-up. It had everything one wanted from a mid-size sedan and it became the de-facto choice in the segment. But as years flew by, the market conditions became unfavourable. A few years back, Honda admitted that it had to go more premium and one of the ways to do that was to re-launch the Civic.The wait is now over the most loving luxury saloon of the world Honda Civic is going to be launch in India on 7th of March. The Honda Civic coming up with price tag of estimated Rs. 21-24 Lakhs. As the competition in the market is very high the SUV's become more cheaper than sedans or saloon cars. So it is not easy task to get back to Honda with this Luxury premium saloon.

The 10th-generation Honda Civic comes to India in the form of a mid-cycle facelift and straight away it looks striking. The front chrome grill is the most attractive part of the car thom the exterior point of view.The beautifully detailed headlights and sharp contours for the foglight only up the style quotient factor in the low slung design, the Civic looks fresh and sporty. 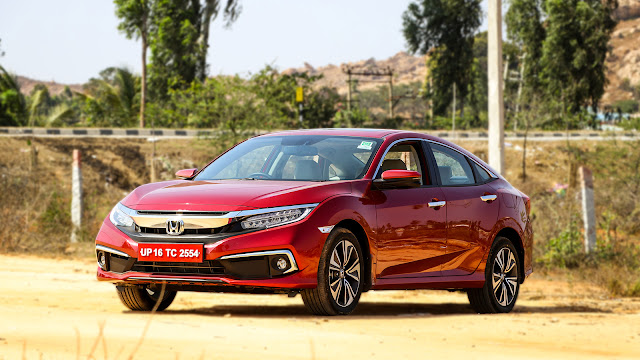 The attention to detailed is continues when it comes to side view of this flawless curves on the car which is seamless.The five-spoke 17-inch alloys look fitting to a premium car like the Civic and the glossy chrome-finished handle-bars add a dose of flair. What is very noticeable is the exceptionally well-executed fast-back sloping roof design roof design which makes the Civic stand out instantly in the segment. 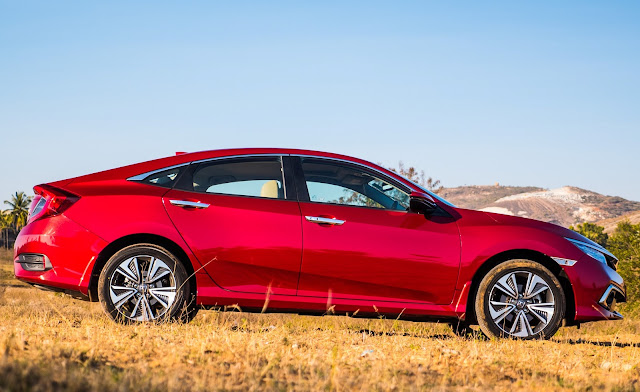 At the back, while the boot is stubby, it seldom looks out of place. However, the boomerang taillamp looks a bit large but has an interesting design nonetheless. Unlike the headlights, the taillights are only partially LED. The bumpers and number-plate housings are well designed and especially from the rear three-quarters, the Civic looks very athletic. 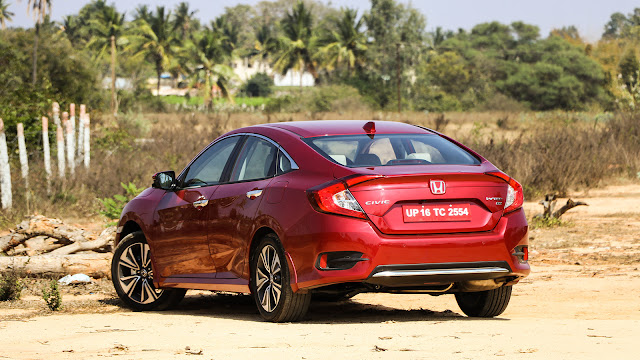 When it seems to be roaring onto roads that feeling is amazing as the looks was sporty with detailed work done by the Honda on this Premium Saloon. The 10th Generation of Civic is ready to set new records. 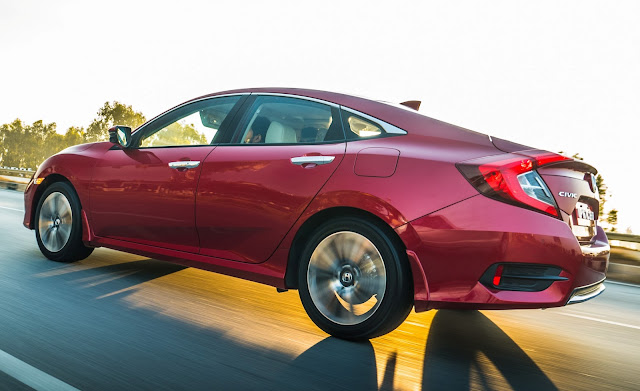 The beige black color gives the premium looks and it feels very airy when we entered into the cabin. The design is not as absolute as the previous civic but it looks refreshing. The interior is designed to keep in mind that the needs of the driver should be fulfilled as the low seats although not to everyone’s fancy, compliments the feeling.The quality of materials at large is good and we particularly liked the stitching on the leather seats which looks like it belongs to a more expensive car. 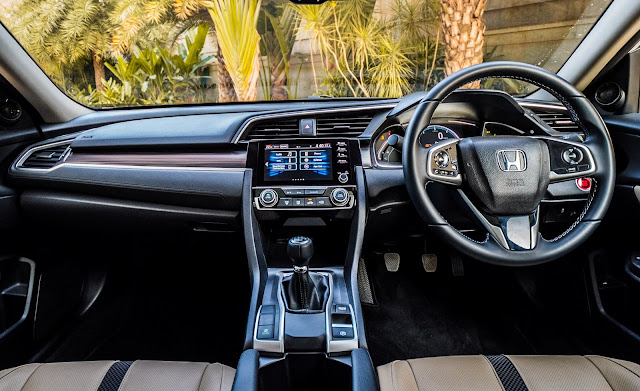 The ports for HDMI, USB and the 12V charging socket are hard to reach and to access the USB port for the rear, one has to get into below the front centre armrest to access it. As the touchscreen system is trending these days so it becomes a necessary part of the accessories.You get a 7.0-inch touchscreen infotainment display with Apple CarPlay and Android Auto, an eight-way power adjustable driver’s seat and a smart key (which can be used to turn the engine on and off, operate the sunroof and power windows and open the boot) are standard. The fully digital information cluster connects with the phone book, call history and music which is very reliable to use. 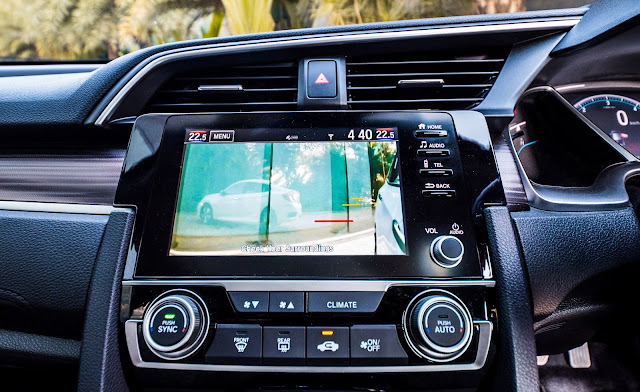 Look what we get new digital instrument cluster from the CR-V. When it comes to digital meter which is well designed as keeping in mind all the needs to get familiar with the driver perception. The work done on the meter console is really appreciable. 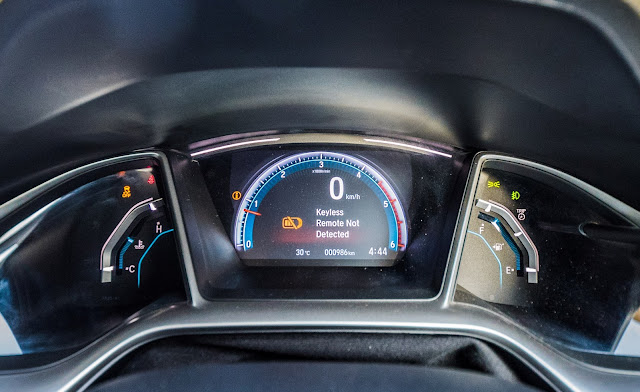 Less number of buttons on the gear box only some features are there which is parking mode, eco mode and Brake hold which is enough. Some empty buttons are there to get a proper mirror image of the gear box enhance the attention. 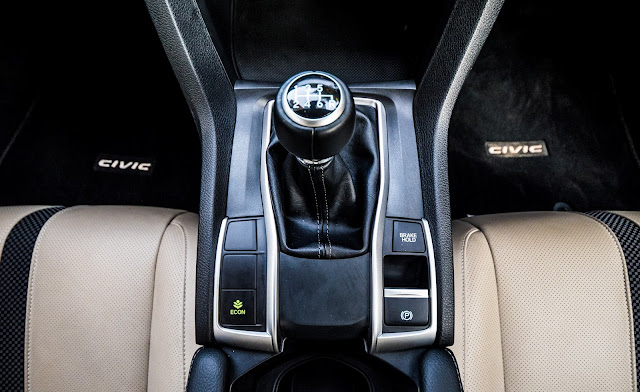 The rear seats of the Civic are a tad low and that is done intentionally to liberate more headroom in a car with a sloping roofline. This makes ingress and egress difficult particularly for the elderly who are likely to occupy the back seats all the time. When you sit in them, you don’t get the sense of space that you expect from a D-segment sedan. In fact, the City seems to offer more space. The legroom is adequate but no more and the headroom, though not very tight is still scarce. It is surprising because Honda has always been the champion of carving out more space in a compact footprint. 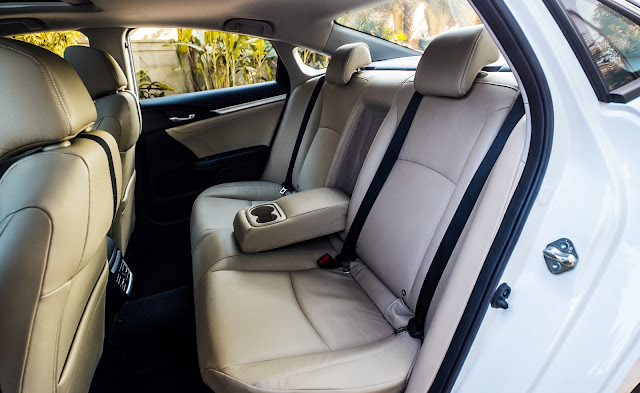 Honda is offering the Civic in India with two engine options. Starting with the petrol, it’s the 1.8-litre unit that outputs 141 HP and 174 Nm. The engine is smooth and refined but the gearbox choice plays spoilsport as far as enthusiasm goes because it’s slow to respond, has the rubber band effect in the top-end and overall performance isn’t impressive for a Civic. The bottom-end isn’t strong and the more you rev the motor, the more it rewards you with progress. Redline comes in at 6500 RPM and the Civic petrol does have a good top-end, making a sporty snarl past 5000 RPM. A manual gearbox would have been really welcome in the Civic petrol as the engine is a gem but the CVT box doesn’t let one exploit the best out of this VTEC mill. 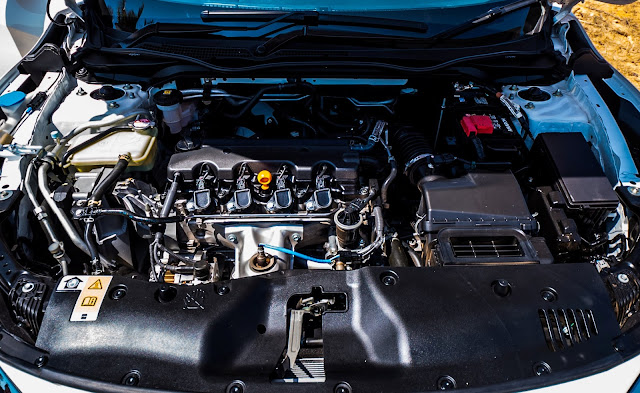 Coming to the better engine on offer on the Honda Civic, it happens to be the 1.6-litre i-DTEC unit that also powers the CR-V but unlike the crossover, the Civic uses a 6-speed manual gearbox and not a 9-speed automatic. The oil burner lacks refinement, is vocal, more so as you rev it past the mid-range. It does excel in drivability with good low-end lunch, turbo lag being very well contained. Top-end is lacking but the engine is free revving and reaches 4800 RPM on the tachometer. The 6-speed gearbox is smooth shifting and the clutch is light too.