MG - Morris Garage was established in 1924 one of the oldest car-makers put there step into the Indian Market with there new car named MG Hector coming up with the I-Smart Technology new in this segment. The Bookings will be open from 4th of June. 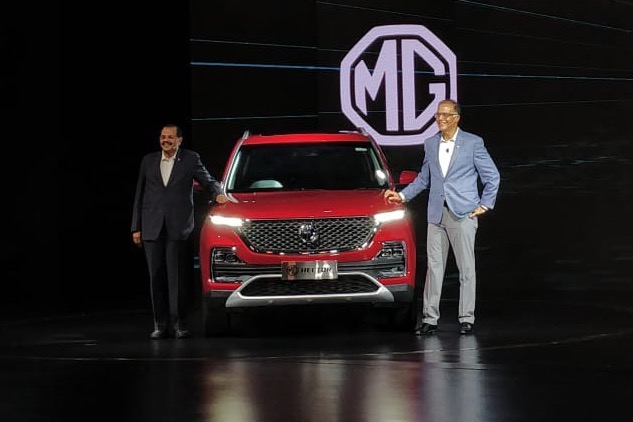 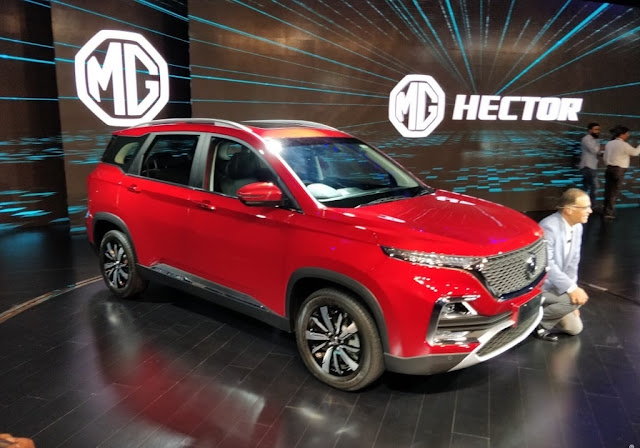 It comes with large R 17 Dual toned Alloy wheels which enhance the look and due to this the ground clearance of this car is increases which is the need of every car in Indian market as the roads and the condition of the market is like that. The chrome work is everywhere like the Chrome strip on Side Cladding ,chrome finish on Door Handles and the Chrome Finish on window Belt-line. 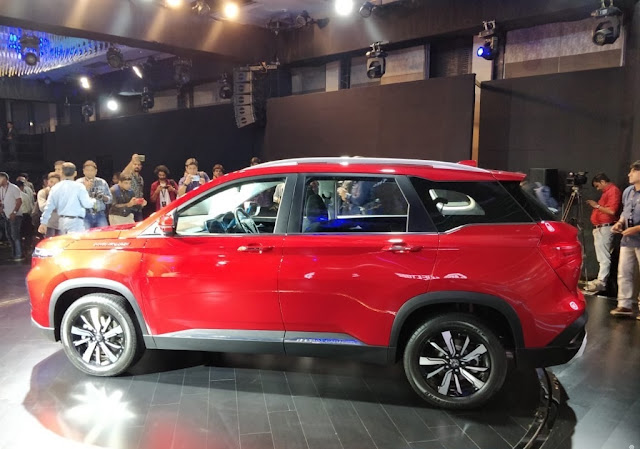 Also the Silver finished Roof Rails are there on the top and on its lower end the Shark Fin Antenna is located. As this car is loaded with a lot of features inside and outside may be this car is ready to break all the records and the sleepless nights for the rivals of this MG Hector. 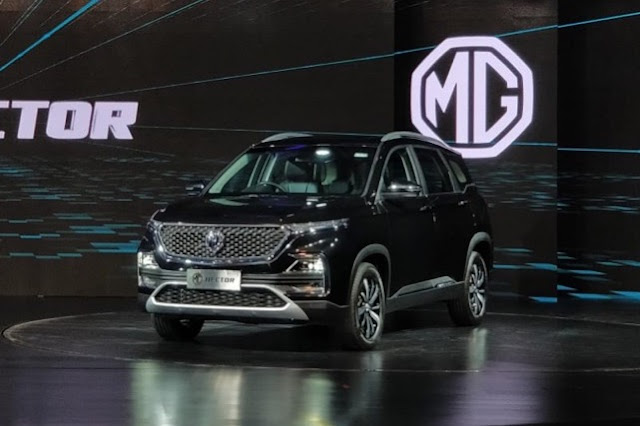 The smart technology is utilized everywhere as there are Automated Head Lamps with LED Fog Lamps. The design of the Headlamps are very unique somehow followed by Tata Harrier.
The Front Chrome Grill is super-finished and magnanimous.The outer covering of the rear grill area is designed very carefully which is giving the self confidence. The floating indicators are also there below the Fog Lamps which is intricate thing in this car. 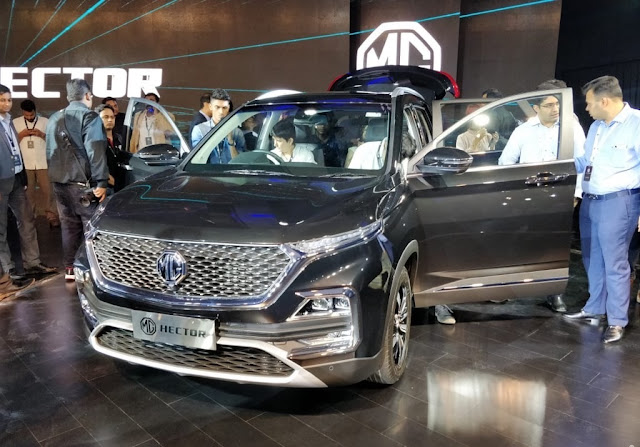 The Rear side has a symbol of "INTERNET INSIDE" which tells about the intelligence of the car that how they are representing this by marking it on the back as this car has many feature which easily said that the car has the ability of Intelligent car with Internet Inside the cabin now becomes the need of the clients as they need something which is very unique or different in the segment. 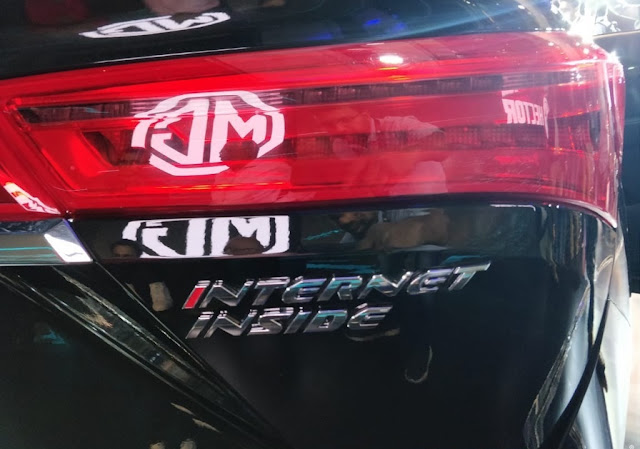 On the rear side some interesting features are there like One Touch Powered Tailgate which helps in opening  and in closing of the Tailgate with height adjustable setting by just Pressing a button. Also the rear fog Lamps and the Floating Indicators are also there on the back of the car. The Dual Plane Panoramic Sunroof is extremely pleasant and refreshing part of this car. 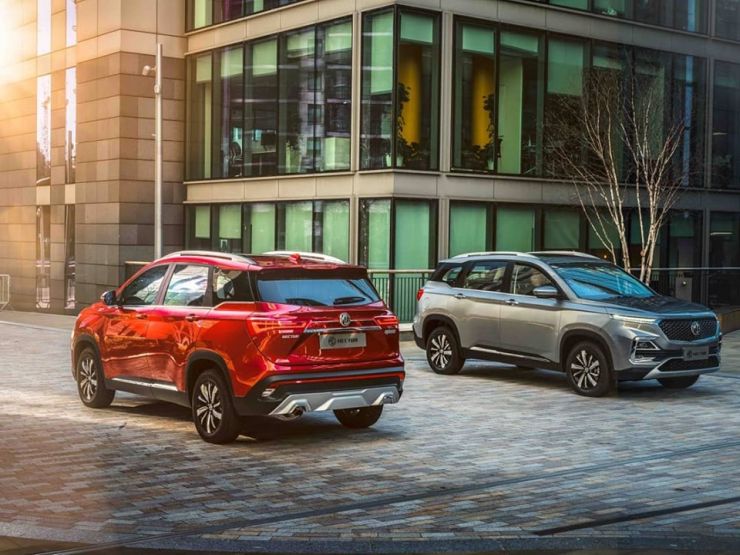 
The First Internet car of this company MG Hector is coming up with new advanced connectivity system known as I-Smart Next Generation System which gives combines the software, hardware, connectivity services and application.

The I-Smart technology which is developed by the partners like Cisco, Unlimit and Microsoft among others. This technology is coming up with Smart Application, Advanced Technology, Artificial Intelligence (AI), Voice controlling and Infotainment.

The vertically mounted 10.4 inch ultra large HD display system is the command center of the system.
It allows to manage the complete vehicle settings as per the need and pre-loaded with entertainment content. The system is coming with machine to machine embedded sim, along with SUV Internet Protocol version 6 makes this car 5G ready. System is offering features like Remote Location,Real Time Navigation, Emergency Response, Geo-Fencing and many more. 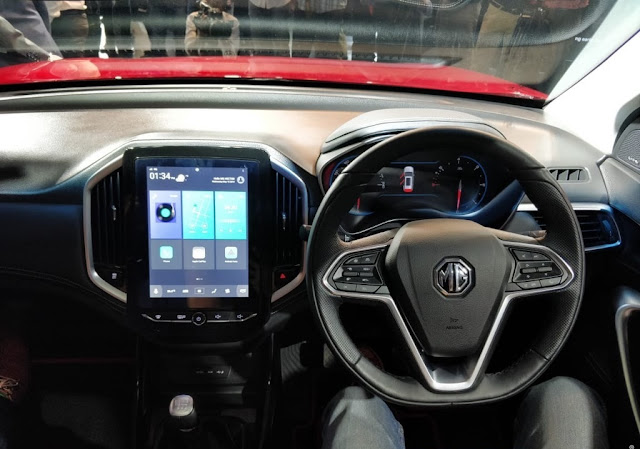 Like the Google assistance this system can be turned up by saying "Hello MG" and is allowed to control over 100 functions.

The Voice command system is the one of the Key Feature in the car. The system allows to control the features from the voice command like Opening of the Sunroof , Climate Control, Navigation and many more.

The system even understand the Indian accent to make it suitable for the Indian Market.
The MG Hector is also having ecall emergency response that automatically send the notification to MG's customer management system. 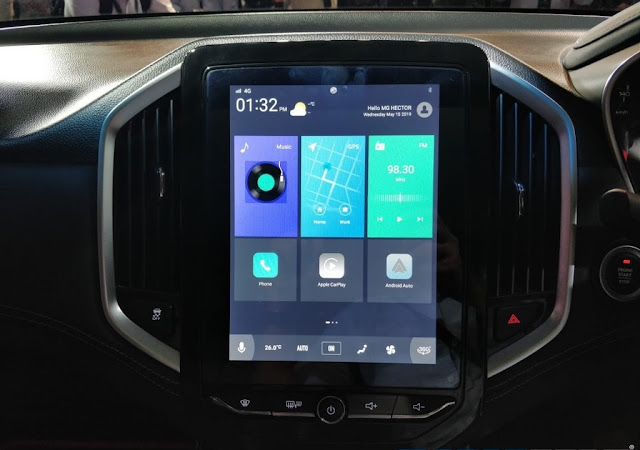 The system is supported with  iSMART Mobile Application which is feature rich like none other in Indian Market. Whenever the app is open the car is scanned by it and the information includes like location of car, Tyre pressure, Doors are locked or not. The owner can directly open and close the doors by app moreover turn on the ignition and switch ON the Air-Condition.

The free loaded apps are the TomTom IQ Maps, Ganna Premium and Accuweather app. MG motor is giving the free data too for the first few years. The system is well secured by Microsoft which is the cloud provider for MG Motor. 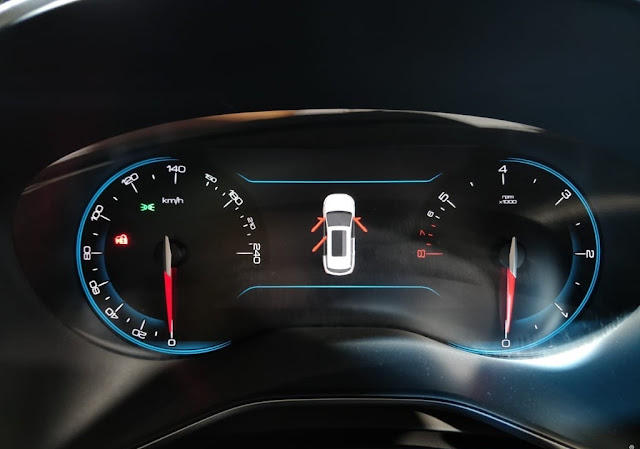